A picture is worth a thousand words—and recently, a woman from New Zealand showed that they can be pretty damn effective at shutting down haters, too.

Simone Anderson, a 24-year-old freelance hair and makeup artist, says she went from 373 pounds to 185 pounds in 11 months through a combination of eating well, working out, and weight-loss surgery.

Simone documented the whole thing on Instagram and Facebook, picking up tens of thousands of fans along the way. She’s posted weekly check-ins on her progress, including this jaw-dropping before-and-after shot from two weeks ago:

Her Facebook and Instagram pages were flooded with comments of support, but naturally, there were some haters in the bunch, too. People questioned everything from the color of her hair (which she changed during her 11-month journey because…that’s what women do) to her skin color to her apparent lack of stretch marks.

Instead of brushing them off, Simone decided to do shut them down once and for all with this photo: 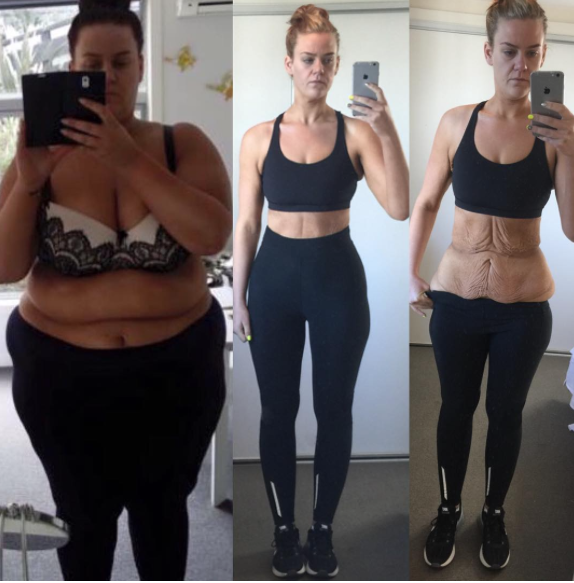 “I don’t no [sic] why but every single comment that called me out for being fake and a liar really bothered me far more than it should,” she wrote. “I think it’s because it took hours of crying and debating whether to share my story online and for others to see, posting the first picture online along with my weight for the world to see what the hardest thing I have ever done.”

Yup, she has stretch marks and excess skin. And, like most of us, she just prefers to keep those things covered up.

Simone also listed off the reasons why she looked different in her before-and-after photos (besides the obvious weight loss):

“It has been 11 months people, things change!” she said.

But her thousands of fans are continuing to show the love: After Simone posted photos of her excess skin, some offered to help pay for surgery to remove it. She then created a GiveALittle page that has raised nearly $3,800.

But Simone says her journey is far from over: “This is just the beginning of a brand new and improved me, one who won’t let anything or anyone get in the way of achieving whatever I decide to put my mind to.”

Impressive, to say the least.